A restaurant taught the whole world what humanity is, in Lesbos, Mytilene, Greece. Greece is another country with a lot of stray dogs. Each day, these dogs are wandering the city for search of food, shelter, and warmth. No one sees the effort they put into living. But this coffee shop saw their helplessness. So the owner of this coffee shop opens it every night for stray dogs after all his customers are gone. In fact, those dogs sleep very comfortably on the seats in the restaurant. It is popular all over the world as a hot spot for stray dogs.

This restaurant opens for stray dogs after all customers have left. It is a safe, warm place for them to spend the night. Dogs who wandering the city all day long are come to this restaurant for a good night’s sleep. How much better this is than the road sleep. Greek charities say there are more than a million of stray dogs in the Greek islands. So how good to have a small group of those dogs or something like this. It is an act of pure humanity. The specialty of the people of Greece is that many dogs in Greece without a permanent home receive a collar and are cared for by the community.

We are going to tell you a beautiful story about a most beautiful and kind hearted little boy in the world. The other day, a little boy on his way to school in Grozny, Chechnya. He met two stray dogs. It was common to see stray dogs on the road, but it was not common for him.

The two dogs were warming themselves in the morning sun. This little boy, called Ibrahim, stopped near the two stray dogs and gave them a sweet and loving hug. A resident of a nearby building spotted this hilarious act of little Ibrahim. So he filmed this and released it on the internet. Then the video became extremely popular around the world and everyone praised little Ibrahim.

A family friend said that Ibrahim is a really very kind boy. His heart is truly full of grace. Because not everyone can embrace stray dogs on the street like this. It must have a beautiful heart. 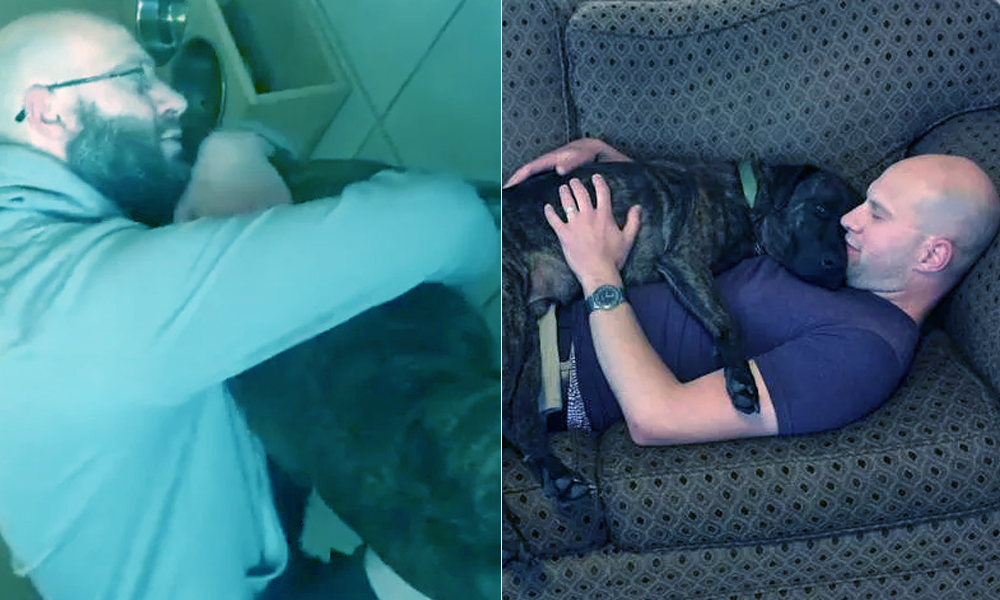 Dogs are an amazing animal of thr animal world. Dogs are the closest animal to man and they have incredible habits. Dogs have some amazing habits that are not even find in humans. Therefore, the dog has the ability to become the closest friend of man. Domestic dogs are often accustomed to the lifestyle of their owners. Those owners are also accustomed to the dog’s lifestyle. So, today we are going to tell you a story about a dog with an amazing habit. This dog needs his father’s hug every morning before breakfast. Let’s go look at the story.

Dash is a very adorable pittie dog. Mr.Ben Johnson met Dash as a shelter volunteer. The first time, Dash met Johnson in the back room of the Humane society, and even their first meeting was amazing. Johnson thought that Dash would be wary about strangers. But on their first meeting, Johnson sat on the floor near the dash. Then, Dash approached over to him and put head on his chest. Amazingly, he wanted a long hug from Johnson. So, he hugged Dash for about 10 minutes.

Because of that loving encounter, Johnson decided that Dash was the most suitable dog for his home. From that day on, he hugged Dash every time he met him. Or Dash pushed Johnson’s chest until he hugged him. After all Johnson permanently welcomed Dash into their family. There was a wonderful loving bond between them. The special thing is that Dash did not get breakfast without his father’s loving hug. So it became a habit of the dash. Everyday he wanted a hug before breakfast. It has been about couple of years since that habit began.

He accustomed to the pre-breakfast hug routine. He needs at least one hug. In addition, occasionally he also refuses the mid-meal if he wanted extra hug. So his family is always ready to give hugs as he needs before meals.

Dogs are really like little kids. Many researchs are also shown that a dog has the same level of intelligence as a 10-year-old kid. So dogs are more likely to act like little ones. If you are a dog owner, you may have experience with the different toys they like, the ways they like to play, and so on. So today we are going to tell you a wonderful story about a dog who obsessed with door stopper.

Farley is a very strong and cute dog of the Australian Shepherd breed. In April 2020, Farley reunited with this new family. From the day she joined the family, the whole house was filled with happiness. Because the house was full of Farley’s fun activities. Everyone wanted to know what kind of new adventure she will going to do next.

When she was a little puppy, she found a door stopper. It was the first time she saw a door stopper. As soon as she found it, she realized how much fun it. In fact, as soon as she saw it, she fell in love with it. Farley started playing with it and soon it became her favorite toy. She loved it so much that she did not take any kind of attention to any other toy. Also no one tried to change her attention.

Farley’s behavior was really funny and cute. So Farley’s owners decided to make a video of she playing with the door stopper and post it on social media. It was a really best idia ever. One person who commented on that video came up with a amazing idia. That is to say, make a board with a bunch of different door stoppers for farley, and present it as christmas gift. It did not take long for Farley’s owner to realize that his idea was an amazing idia.

Implementing that idea, her owner, Mr. Victoria Stuart  decided to prepare a wonderful Christmas present for Farley. So, he found a perfect wooden box internet and painted and clear-coated it. Then he assembled it with 25 door stopsers. On Christmas morning, they presented this incredible gift to farley. At first she could not understand what this was, but she was very happy when she found out that was door stoppers. Door stopper became one of her favorite things in the world.

She very happiely played with the Door Stopper several times a day. So Farley was thrilled to receive so many of them.

Passengers and drivers do many things to avoid the fatigue and boredom felt in traffic jams. Reading books, listening the music, using social media are some of them. Some sit in their seats until the situation was resolved. Sometimes, some amazing things happening in the traffic jams like this. So, a woman who was stuck on the freeway in a recent traffic jam in Michigan, saw an amazing thing like that.

A man got out of his vehicle several cars ahead of her car. She could not imagine what he was going to do when he got out of the car in such a big traffic jam. So she turned on her camera and started filming the man. What she saw was truly heart-warming.

The man went to the window of another car that was nearby. Then she saw a dog in the car and he petting that dog. It’s really amazing to see something like this in such a big traffic jam. He patted the dog and began to having fung and petting the dog’s head and neck. It seemed like this dog hoped that some attention and love from this kind stranger. Also this man was very happy with the dog. No doubt that unexpected friendship helped them to forget that heavy traffic jam.

This amazing event was videotaped by a woman named Shelby. She told the media that it was an extremely beautiful thing to watch and she was glad to be able to capture this kindness on tape.