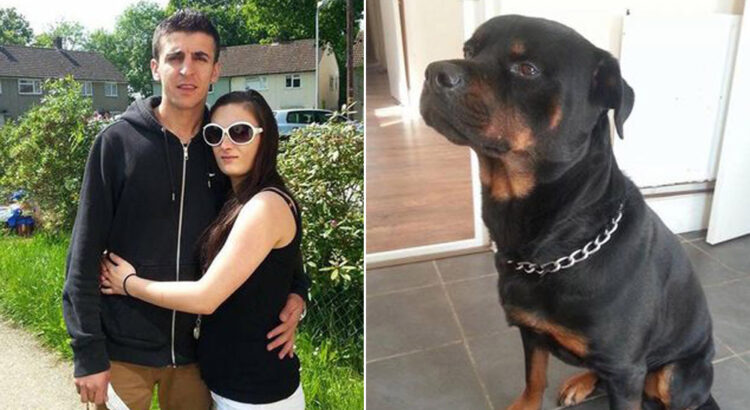 Many people adopt dogs for safety. So for those who choose a dog for protection, the Rottweiler is the best breed. Because Rottweilers have been used as guard dogs since ancient times. Properly trained and socialized Rottweiler dogs are a perfect fit for any home. They’re really like lifeguards. This is the best example of that.

Rottweiler dogs come forward to the save their owners’ life at any moment. Kasha Marie Weston and Aryan Salhi are Rottweiler owners. They had a big Rottweiler dog in their house. One day Kasha and Aryan were watching TV in the room. By then Kasha was pregnant. Their Rottweiler, Rocky, was also lying in the room next to them. In the meantime something unexpected happened. Someone knocked loudly on the door of their house. They could not imagine who would come home at night and knock on the door.

Rocky also looked at the door and started barking crazily. No one could stop Rocky. The couple thought that his barking sound would be disturb to the neighbors’ sleep. So they put Rocky in the bathroom and closed the door.Then Kasha looked through the peephole to see who was knocking on the door. But she could not see anything. So she slowly opened the door. At that moment, gang of four men broke into the house. Kasha and Aryan had no time to even think what was happened. They completely caught the couple. One man dragged Kasha into the living room. Then the men grabbed them very tightly and asked “Where is the money?” Although they found out that kasha was pregnant, they didn’t care it. Because they wanted to get the money they had somehow. They begged them to leave them.

In the meantime, something happened that no one expected. The Rottweiler who was in the bathroom broke down the door and ran to the living room. He then tried to bite that four unknown men. Rocky is a very big dog. He sprang to protect owners and bared his teeth at them. So the 4 men tried ran out the front door after seeing Rocky. But they able to catch one man and they informed the security unitis about this. Rocky protected his owners until the officers arrive. He was truly a superhero who saved the lives of his owners.